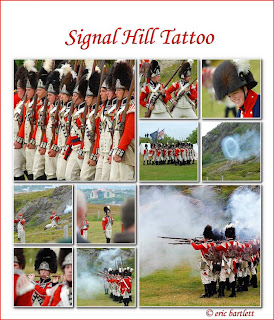 On Canada Day the Signal Hill Tattoo commenced another year of activity. I was there for my first time ever and photographed the event.
The Signal Hill Tattoo is an internationally known award winning historical animation program. The Tattoo has won numerous awards including the coveted Canadian Heritage Award, the City of St. John’s Tourism Event of the Year Award, the Historic Sites Association of Newfoundland and Labrador Manning Award, and has been twice named to the Top 100 Tourist Attractions in North America by the American Bus Association.
The Signal Hill Tattoo is recognized as a ‘must see’ tourist attraction and is the first presentation of choice for Newfoundland families hosting family or friends from away. The Tattoo has traveled throughout the Province participating in various community events and has performed for numerous dignitaries including Her Majesty Queen Elizabeth as well as several Canadian Governor Generals. The Signal Hill Tattoo has a strong commitment to commemorating our Province’s rich military history.
The Signal Hill Tattoo is performed each summer on O’Flaherty Field one of the sites where defenses were erected during the War of the Spanish Succession (1702-1713),which resulted in the withdrawal of French troops from Placentia and the establishment of Fortress Louisbourg, and the Seven Years War (1756-1763), which ended forever the danger of French attack in North America.
Posted by Unknown at 11:35 PM

Great pictures, can't believe it was your first time there! I try to go every year.

Thanks. yes, my first time I'm ashamed to say, lol.

Other Sites and Blogs of Interest